Gunnar Garfors might not have attended a course in Travel Writing as his book 198 How I Ran Out of Countries starts in a Boeing 737. (I recently did, attend a course, and the first rule was not to start a story with the plane.)

However Gunnar was landing to his 198th country and considering the importance of the moment and the thousands and thousands of air miles to get there this might just be the place to break the rule.

I’m a country collector myself, even if I will never reach this stage to arrive to my last country on the earth myself, with my only 102 countries , already 58 years and being a woman, so I was definitely interested in reading this book. I had even actually been waiting for it to be published in English (it was first published in Norwegian).
Being interested in topic, I have dutifully acquired a number of Finnish travel books with similar content: telling the stories of all the countries in the world or most of the areas listed by the Most Traveled People. However, I must admit, that after having read a few pages I have left them at that point. (But I promise, Ismo, Rauli and Veikko that I will eventually get there!). 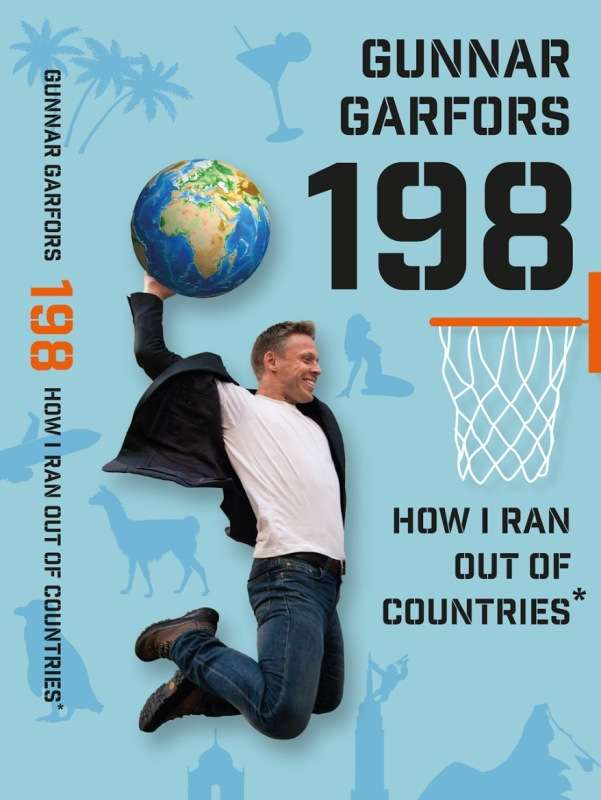 Gunnar however doesn’t let me put his book down. On the first chapter he lands on an island, doesn’t reveal which one, but starts telling stories of all the other countries he has visited before this point. And I did not cheat and browse to the end of my Kindle book. Nor had I paid attention to this on his website even if I have been following it for a while now.

He gives the reader a bit of a background of himself, a Norwegian coming from an unknown small village called Naustdal. I have still no idea where it is. But I did recognize half of the places Gunnar describes in his book.

His way of taking you to this trip around the world is brilliant. He breaks the chronological order immediately by starting from the end and also after that there is very little order in the book. The countries are not visited by continent, alphabetically or by any other order which could be defined by anyone else than Gunnar himself. He groups the countries in random groups like You’ve Got to Go Here, Here Comes Trouble, T.I.A. This is Africa – his full list of groups being:

The first one, The Stans, is of course a known definition. By Kazakstan I feel the urge to tell my travel blogger friend in Astana about this book, but resist, with the idea that I need to finish the book first. And I feel ”home” on the trip to lake Issyk-Kul in Kyrgyzstan.
By Tajikistan he has show determination needed if you want to visit every country in the world: the border between Uzbekistan and Tajikistan is closed but that doesn’t stop Gunnar and his friends. Gunnar travels often which his male or female friends or girlfriends, but none of visits most of the countries he visits.

Some of the 198 countries are “easy” for him in the sense that he lived in them for a while or he had friends who lived there or originated from those countries.
Travelling alone he also makes friends on the road.

I disagreed with most of Gunnar’s choices of countries not to visit again: Qatar, Bahrain or Kuwait were not that bad, but of course, there are so many other countries, that I will not go back to these either. But I could.

Myanmar, Bhutan and Madagascar are sort of on my list already and I have visited Cuba and Brazil already, so I’m quite well off regarding countries I should visit according to him. And of course he is not alone in telling people to go to Myanmar or Cuba, now.

Here Comes Trouble lists a bunch of African countries, but also Jordan, where his trouble was risking the strict moral rules of the country by going out with a local girl.
We explored it partly with a male guide/driver and our only trouble was him panicking when it started to snow when we approached Petra.
And also I remember the weapons in Israel, not in nightclub, but on beach, where they also seemed somewhat inappropriate.

And I must remember not to travel by boat from Gabon to São Tomé and Príncipe?: reading about the 40 hour trip was enough for me! Not that I actually think I will ever visit either of these countries. Or Equatorial Guinea which was next on Gunnar’s in itinerary at that point.

Regarding Tourist Hells I have nice memories from Maldives, but I chose the private island version over Male. I didn’t like Thailand either, but Spain and Portugal are fine!

Food isn’t that high on my list of things to experience on my travels, so the only thing on the  Gunnar’s list of gastronomical experiences I can relate to is guinea pig, even if I ate it in Cusco and not in Quito. But even if I could think of eating dog, with the next section of countries Gunnar is really entering another world for me. Partying in South Sudan, anyone? But I made a note to visit Hotel Rwanda in Kigali, going there in December.
My Belgrade on and around river Sava was much more pleasant than the one filled with girls with silicone implants in the bars on Stranahinjica Bana Street.

Gunnar introduces himself as the youngest hobby traveler who has been to all countries of the world. However the list of countries he has paid work-related visits is also quite long.  But maybe he did also visit all of those also privately, I’m not sure.
Among the globetrotters in Finland quite many of us have also done a few countries with work related travel, but on the other hand we don’t use this definition of hobby traveler.

Gunnar is also into extremities: on top of having visited every country in the world he has also visited 19 countries in Europe in 24 hours and 5 continents in (another) 24 hours. And popped into Sydney just for 24 hours, from Norway (to give a lecture, the fun probably financed by Ericsson).

Being single the list of countries under title Love and Marriage is impressive. Being woman, married and not that young any more, gets almost embarrassed just reading all those stories, so I will not go into them. Read the book, there is more in it than just traveling.

Regarding hard to get into -countries like Angola and Saudi-Arabia for example the trick seems to use the transit-option.  I don’t think I could pull this through – and I only have one passport:

“The first police officer I encountered on the border surely has a grandfather in Germany. There was no way in hell that he would let me in, he even confiscated my passport. “You will get it back when you leave,” he said with a triumphing smile.

He enjoyed utilizing the little amount of power he had. Luckily I traveled with both my passports, and I noticed that a change of guards was about to take place. I waited for the new police officers to get into their routine before I approached one of them, a woman in her 30’s. She let me leave the airport and enter the country. Hallelujah!”

Neither would I want to end up here:

”OK, I will take you to the best hotel in town.”
I wasn’t expecting Marriott, and wasn’t surprised. The hotel came with its own mosque, coincidentally just outside my door. I would not need an alarm clock. If I could ever manage to fall asleep. The cockroaches in my room were the size of bananas, and I performed mass extinction of the tough creatures by my show before I was sufficiently at ease to manage to sleep under the relatively clean bed linens. My room actually came with an en-suite bathroom, but the shower didn’t work.The toilet itself was actually connected, but not the cistern. I had to carry water from the tiny sink in a dirty plastic cup to the dustbin which I eventually emptied into the toilet to make it flush.
There was a television set in the room, too. A 14 inch screen was somehow mounted on the wall. The content on it was less impressive, nothing but locally produced soap operas. Nigeria has one of the world’s biggest film and television industries.
Nollywood is Nigeria’s and Africa’s take on Hollywood and Bollywood.
No breakfast was served following the mosque concert in the morning.
Zero stars.

This was in Maiduguri, Nigeria.

Having done a bit of traveling myself it was also interesting to compare our worlds.
I picked up a few random countries and compared: Gunnar’s Vietnam was about visiting a friend and a shipyard in Vung Tay, and a lot for bars and nightclubs. Comparing to ours which was about sights and history in Hanoi and Saigon.  Machu Picchu, however, taking the train from Cusco to Aquas Calientes and a bus from there to Machu Picchu, here our experiences were very similar.
It is actually fascinating to discover how many faces this globe has got, showing each one of us a bit different view of the same city or country.

Finland is, of course, also in the book. Gunnar and his friends celebrated Millenium in Haparanda – Tornio, crossing the bridge to Finland just before midnight, thus “avoiding” the moment when the millenium turned into the next one.  Most of the other people crossed the bridge to the other direction, wanting to experience it twice.

Finally, to get real, even if I really loved this book, there must have been something which was not totally perfect. The very personal grouping of countries might make it a bit hard to find your route back to a specific country – I read the Kindle copy and it has got Search, but unless the hard copy version has got a good index you might get lost. Also trying to keep track of his numerous friends with slightly unfamiliar Norwegian names, was a bit hard. Nicknames, like Dr. Vodka, were easier to handle!

Regarding meeting a lot of people around the world – maybe Gunnar did attend a course in Travel Writing after all as one of recommendations was to meet local people to get a better story. Gunnar certainly did it.
And unfortunately he also made me feel a bit old and bore: I have almost entirely traveled as a couple with my husband and mostly stayed in 4-star hotels – and skipped the bars and parties, so the amount of people we have met in the world isn’t nearly as many as described in this book.

But, whether you have ”done” 20 or 50 or 100 countries – or all of them, do read this book.  It will take you around the world even if you just spent your holidays for now. Sit back, plane or not, and enjoy the trip!

You can also take a trip to all of these 198 countries by following  the challenge which just started on Gunnar’s Instagram account, where a picture of a new country is published almost every day, giving people about 24 hours to guess where it is from.

(Pictures are from Gunnar’s press photos.)