I’m not really a Moomin fan, but of course, being a Finn, I read all Moomin books as a child and have seen Moomin videos and movie with my godchildren.
Tove Jansson as one of the most famous Finnish artist is however interesting and having a special relationship with sea after several years of sailing in the Finnish and Swedish archipelago the stories related to the life of Tove Jansson and Tuulikki Pietilä on the island of Klovharu in the summer time have been especially fascinating.  Already a couple of years ago I read an article about the possibility to visit the island of Klovharu during one week in the summer and I tried to find out whether that would be possible, but as the visits were only possible with own boat or with taxi boat, we never made it out to the island.

To celebrate 100 years since Tove Jansson’s birth the society in Pellinki which owns the island nowadays arranged several trips to the island and when I, based on my earlier interest in a visit, remembered this already early this spring, I managed to book 2 places for us on the trip in the beginning of August. All the trips were quickly sold out – which is quite understandable as the small boat used for these trips takes 8 persons, as the small island isn’t accessible by bigger boats. Even with this boat it was challenging and when leaving the port in Pellinki (Söderby) the captain prepared us for a disappointment by saying, that let’s see whether we can get on the island as the wind was now blowing at 10 m/s, but we were lucky and after ½ hour on the sea we managed to hop on land on the island!

Several television programs have been made from Klovharu, the newest one being the interview of Gay Gustafsson (Yle 23.7.2014) (in Finnish, but with some nice scenery from the island) and several books so the island felt immediately somehow familiar –  but it was still wonderful to absorb the atmosphere of this small island far out in the sea in Pellinki archipelago by yourself!

The cabin, which for Tove and Tooti acted mainly as studio – they slept mostly in a tent set up near the cabin on the island, as this was easier, the studio could be used for work without having to clean it first in the morning – was of course also interesting. The cabin had windows to all four directions and under it, between the rocks, there were a sauna, accessible by a small entrance in the floor of the cabin or from outside between the rocks.
The cabin still includes most of the things Tove and Tooti left there when the left the cabin for the last time in 1992 – when Tove was 78 the island and the sea started to scare her, so they decided to leave this part of their life voluntarily, before they would have been forced to do it.

The trip to the island (link to a picture story of it) was a full-day trip when starting from Espoo, as even if the boat trip only took 2 hours, it was 100 km to the port in Söberby and in Pellinki we also had to take the ferry at one point as there isn’t any bridge and that ferry goes every 15 minutes and as getting there late was not an option, we left early. Actually we left so early that we had time for a nice picnic lunch in Söderby (I love these make your own salad counters in K-stores nowadays!).

Before visiting Klovharu we have this summer also visited Tove Jansson exhibition in Ateneum, where especially the models made by Tuulikki Pietilä delighted also adult visitors. There are several pictures of these in the blog Isyyspakkaus (even if I think it was not allowed to take any photos in the exhibition, but maybe they had a special permit).

The exhibition in Ateneum is open until September 7th, but the island is open for public only until August 10th. The guided tours to the island are sold out, but with own boat (coordinates for the island are: 60°09.9?N, 25°48.1?E) or with taxi boat you can still get to the island. Taxi boat to the island costs, depending on the time spent on the island, about 200 euros and you can contact for example Roger Weckman (phone 0400 879 275) or through Strandverk community (Gudrun Weckman).

Still one link about Moomins – this is from Japan – our guide told that there has been a lot of japanese guests on the island this summer: in a Japanese cafe you can sit with a Moomin character – and even have your rice server in a shape of Moomin! 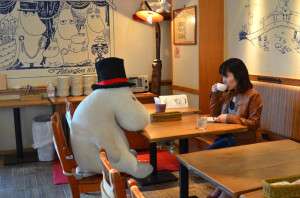 Similar summer trips to different islands during past summers in Finland, for example (these stories are in Finnish, but in most cases pictures link to a picture story and those are of course to some extent ”readable” also in English):

Btw, even if my blog is almost entirely written in Finnish, there is a short English summary, explaining who we are and I also wrote a Travel Trivia story in English some time ago.